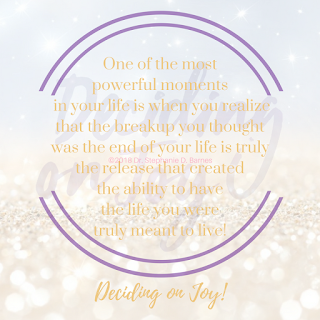 One of the most powerful moments in your life is when you realize that the breakup you thought was the end of your life is truly the release that created the ability to have the life you were truly meant to live!  I used to lament the end of my marriage as a huge failure in my life.  And certainly there were many personal shortcomings that contributed to my marriage not working.  I own that.  I learned from that. Most importantly, I released that!  I released myself from my past so that I could create a beautiful future.  I did an assessment of what I did “wrong” and reframed them into what I could do “right” to be a better partner in a relationship.  I am more cognizant of what I can control—my behaviors and actions—so that I can be better for me and better for the one I love.

Far too often we hold onto our past and allow it to rob us of our future.  I was listening to the Redefining Wealth podcast by Patrice Washington, America’s Money Maven, and she dropped a nugget of wisdom that reminded me of the power of release.  She wisely noted, “Forgiveness is giving up the possibility of a better past.”  Bam!

Can you create a better past?

You can learn from the past and create a better future.

What do you need to release today?

The present is time to create the future you desire, deserve, and deliver yourself!

Today, I challenge you to create a Release Agreement.

Here’s a template to begin this powerful process:

Once you create your release agreement, print it out and post it on your mirror and say it aloud everyday until you feel the freedom of the power of your words and live them everyday in your spirit.

Dr. Stephanie D. Barnes
I am a woman who decided on joy! I was divorced after 21 years of marriage and decided that although my marriage had ended, my life had not! I committed to find joy in the midst of my storm and creating a peace that was impervious to my circumstances. I see life in all its possibilities! I believe that my life is the product of my choices. I choose joy! I am also the author of Deciding on Joy! My Journey from Breakup to Breakthrough in 30 Days. Deciding on Joy is an eloquent story that helps you to stand boldly on the precipice of your rebirth and prepare to fly. It equips you to draw on the best of your life to make the best of a devastation and create a brilliantly beautiful new life. It is roadmap for the rediscovery of the person who had the power all along to create the life she always dreamed of.